I completed it o.o

You must have been living under a rock for the past few months if you haven’t heard of the Wii. And any Nintendo fan worth their salt will tell you all about the Zelda series of games, which have been widely regarded as some of the best in video-gaming history. Almost every Nintendo console to date has had a Zelda incarnation, and the Wii is no exception.

Well, The Legend of Zelda: Twilight Princess is the name of the game, and what a marathon it was. I spent a cumulative 61 hours and 27 minutes playing it, doing all the little sidequests and the mammoth main quest that make up what I regard as a masterpiece of gaming. It feels like an end of an era: I’ve spent so much of my life recently playing the game; but now I can play it no more.

I do, though, have Godfather: Blackhand Edition, which is a totally different and much more violent game to get my teeth into. Anyway, this post isn’t all about video games.

I recently bought a new drum pedal, and have also been putting some more thought into the jimmyteenstv thing. I have something that I prepared myself; I won’t tell you what it is yet because that will ruin the surprise (though I don’t want to build anticipation that will only end in disappointment). Anyway, there will be something tangible coming from me in the not too distant future (I hope).

Also, as a techy side-note, I enabled Markdown support on the comments, so if you’re a bit geeky like me you might want to dabble in it to add some spice to your comments. That is, of course, if it works.

Oh, and as an extra treat, and as a result of my recent acquisition of a proper tripod, here is a picture of me playing the drums (yes, what a lovely treat). Self-timer is a great invention. 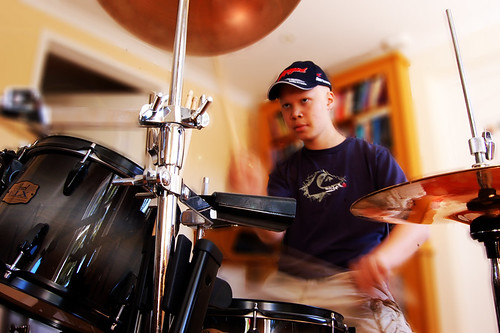 2 thoughts on “I completed it o.o”